“The contribution of the NTUA in Lavrio during 21st century" event 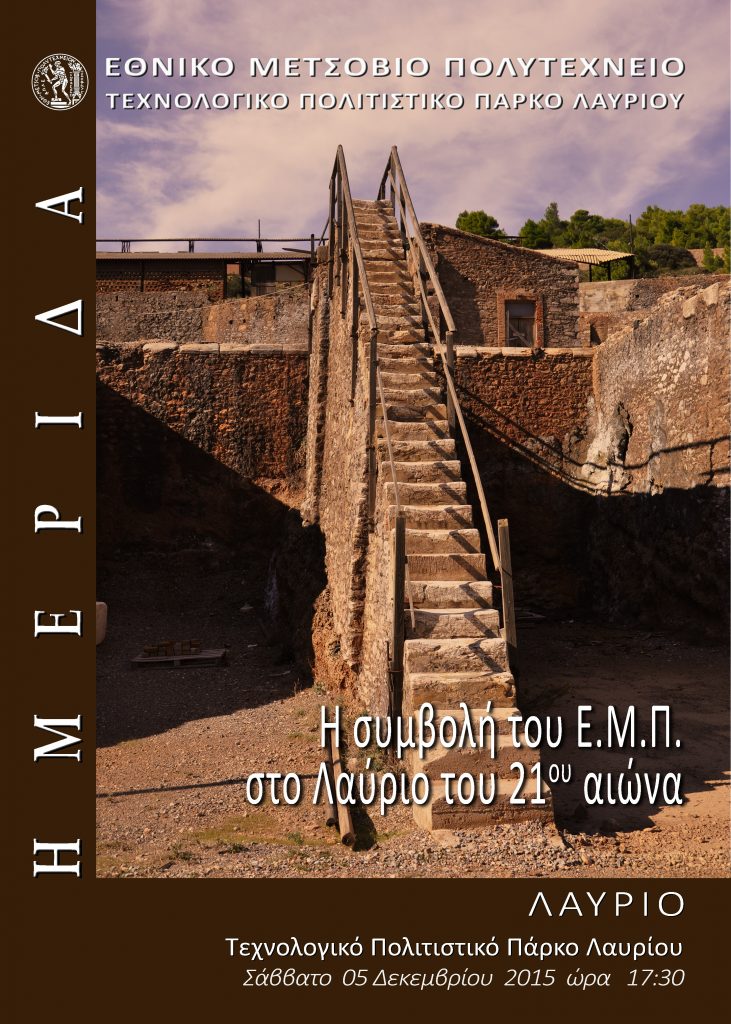 Distinguished professors developed their proposals in five key areas, crucial for the formation and operation of Lavrio in the future: the Port, the Quality of Life of the inhabitants, the Culture, the Environmental Issue and the Suburban Railway.

In the last part of the event, K.I. Panagopoulos, Emeritus Professor of NTUA, was honoured  for his fundamental and timeless contribution to the LTCP. 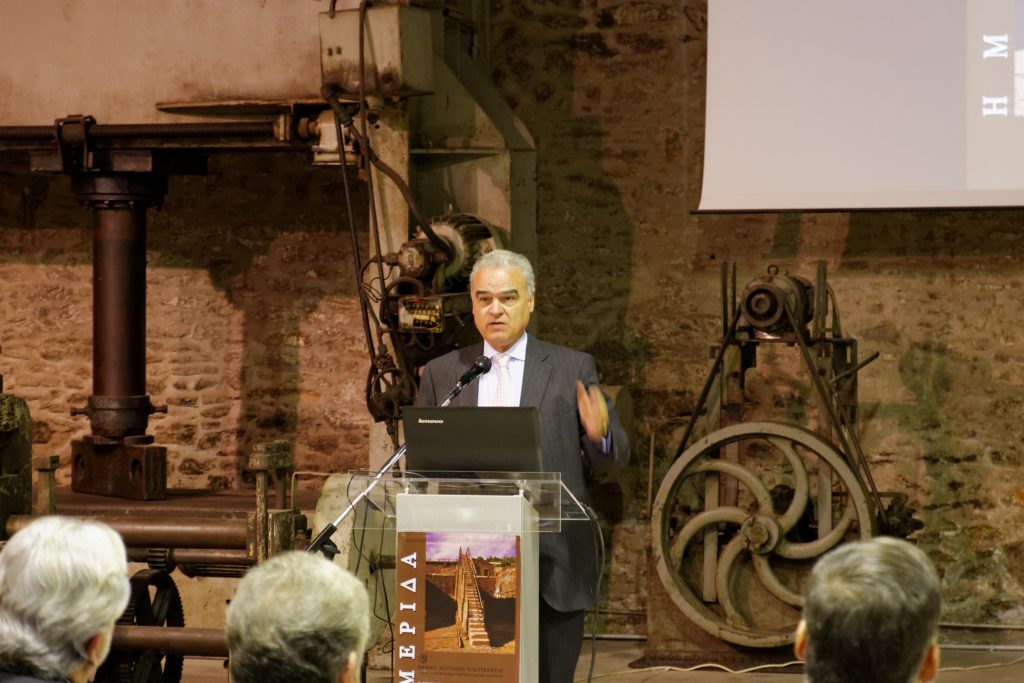 The NTUA’s speakers gave, since the beginning, the stigma of both LTCP’s action  and its contribution to the local community. "We are fully aware of how important LTCP is for the NTUA. It is a window open to society and the latter’s needs and hopes, especially nowadays when the Greek society suffers from the prolonged financial crisis. It is a field of testing new ideas, research results, technical and cultural innovations, a field of osmosis between specialists and non-specialists, an interface of interaction between research and production, education and society“.
From the welcoming of the Rector of the NTUA, Professor J. K. Golias. 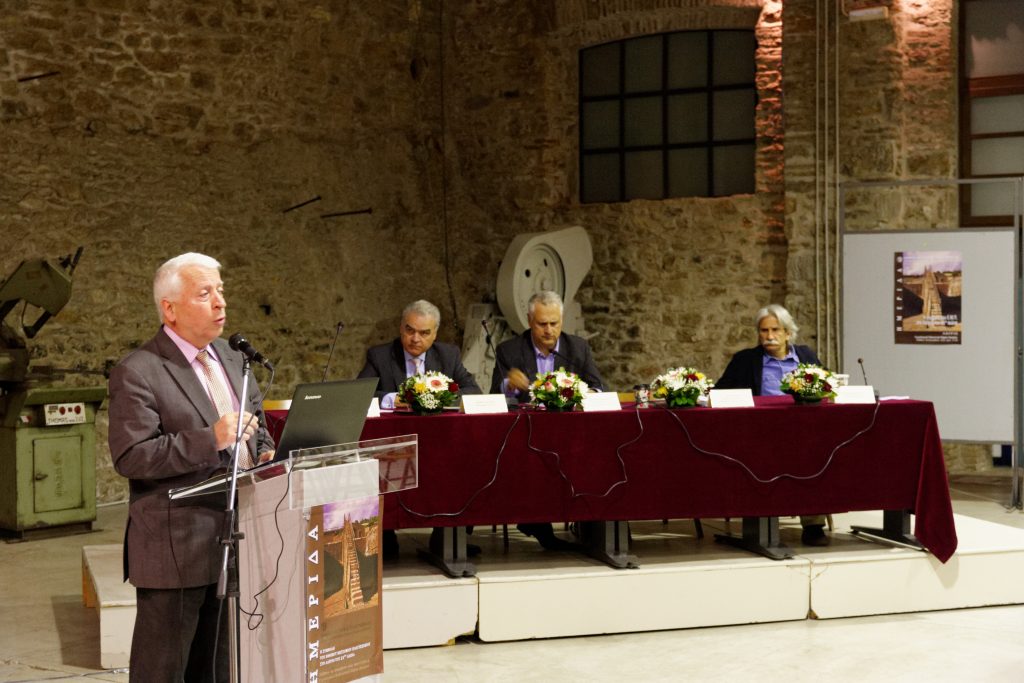 "The LTCP’s executives, the NTUA’s tens of professors and hundreds of researchers who have been involved in the foundation and the development of the Park over time and  the LTCP’s staff, have been systematically trying all these twenty years to promote the Park’s goals which focus on the preservation of the “heavy” "industrial heritage of Lavrio, on the creative connection between the University and  the society and production and  on the promotion of innovative ideas and solutions. I believe that, despite the difficulties, LTCP has taken important steps in these directions”.
From the welcoming of the President of the NTUA-AMDC, Professor K. I. Moutzouris. 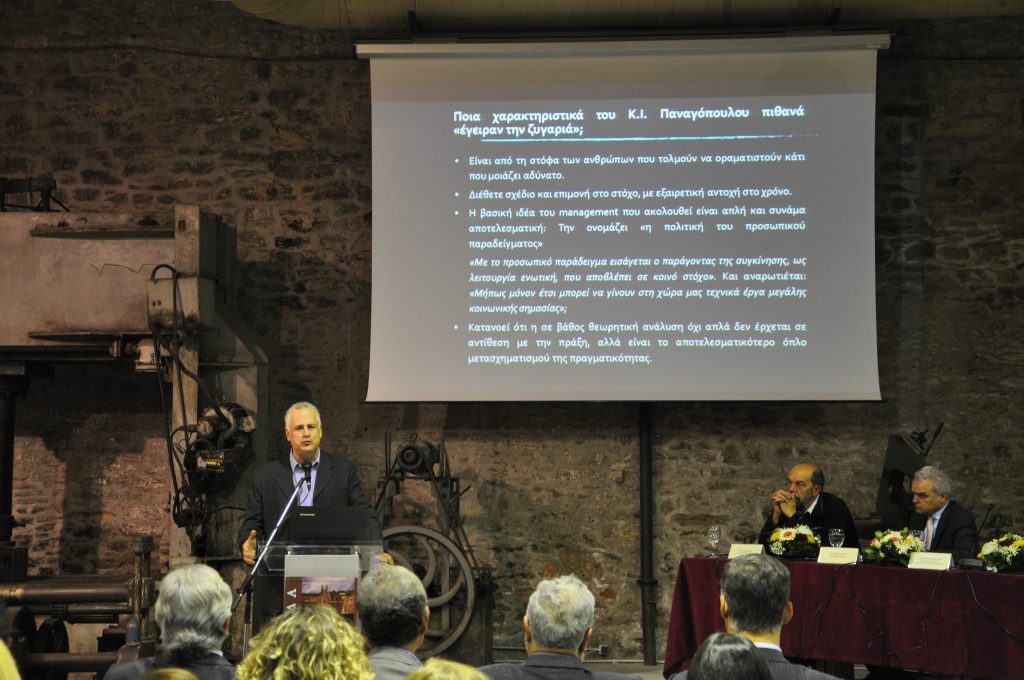 "The NTUA has to resist the surrounding atmosphere of decline and passivity. In no case is it a choice for the NTUA to slip into a defeatist attitude towards the current adverse conditions, because such a thing would have multiplicative negative consequences for the valuable part of the Greek youth, its students. The LTCP’s actions all these years is an actual effort to the opposite direction. Despite all the everyday life issues that a “wounded” economy creates, LTCP have been tracing exit paths and picturing a better future.”
From the welcoming of the Organizing Committee’s President, Professor D. Kaliambakos. 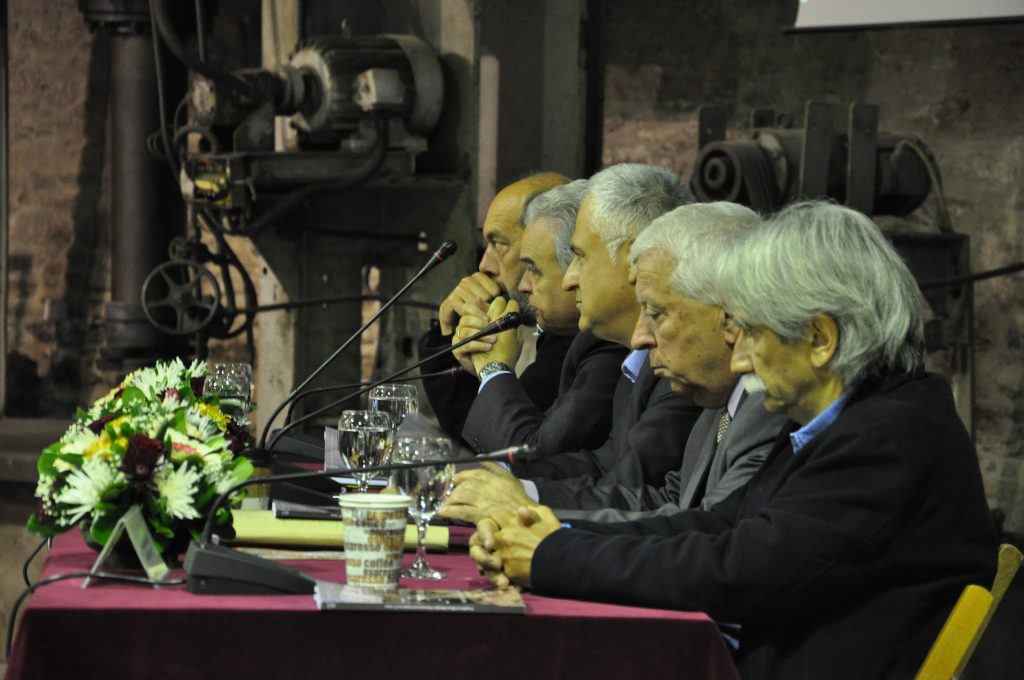 A founding and fundamental feature of the LTCP is its direct and multiple relationship with the local community. LTCP is a strong and permanent ally of the city of Lavrio. Additionally, it is a core of problem analysis, a trigger to the growth of the technological innovation and social progress.

Five key questions that will have a decisive impact on the Town’s  future were the content of respective research projects which were coordinated by five NTUA’s professors, each one with a distinguished action in their respective fields, whose results were represented during this event.

I. Golias. Hector
Lavrio, mainly due to its geographical position and the prospects that this offers, shows significant growth dynamics, through its emergence as a multimodal transport hub of Attica. The project focuses on the presentation and evaluation of the current traffic situation in Lavrio, with references to the town’s road access and the traffic and parking in the town and its port on the one hand, and on the development prospects, with the reopening of railway access and a possible further port development, on the other.

K. Moutzouris. President of NTUA-AMDC - M. Koufali
The purpose of this project is to update the proposed development directions of the Town’s port, focusing on the current economic situation. During this process, limited costal and commercial traffic was found in the port, with no significant prospects for development. On the contrary, the yachts’ service is a strong and cost-effective activity for the port. In addition, Lavrio’s emergence as a port of departure for cruise ships, is in line with the touristic character of the area and attracts the interest of ship-owning companies. 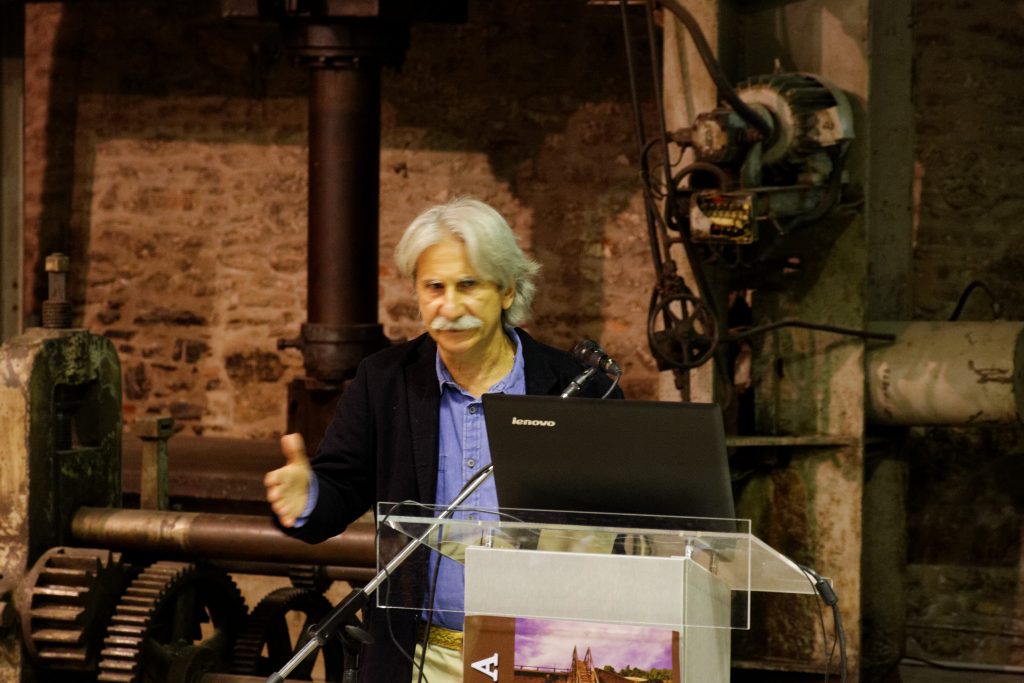 Th. Vlastos
The main idea that has been developed in this project is that Lavrio must maintain its identity. Lavrio will defend its history if it defends its scale and therefore, the quality of life of its inhabitants. By shielding the neighbourhoods in areas of light traffic, by avoiding the passage through the centre of the Town,  by creating an undivided, large, green space between the centre and the port, it will become a town with fewer cars and lower speeds, with more cycling and hiking. 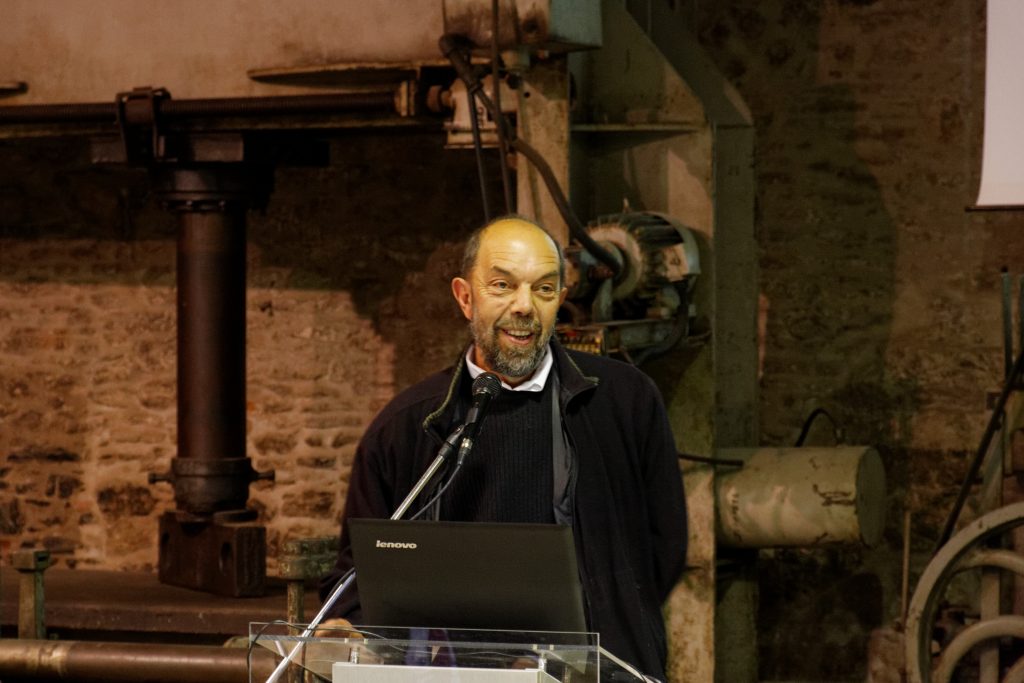 N. Bellavillas
The culture that comes out of the industrial heritage, as long as the touristic activity that the latter attracts, have been operating as pillars of revitalization and recovery of the areas affected by the deindustrialization during the 1980s and 1990s. Lavreotiki, the southern edge of Attica, is a historical industrial zone, where the first heavy industrial company of lead mining and metallurgy of Greece was founded, during the 19th century. It is at the same time the cradle of the ancient silver mines of the Athenian Republic, of the classical era. This place, in an area of ​​120 sq.km., already has a rich cultural reserve of international interest, which can operate as a development resource under certain conditions.

D. Kaliambakos
The Town’s pollution by heavy metals is the heavy price of its avant-garde in the industrial development. However, any environmental risk can be effectively mitigated when it is properly analysed and addressed in the context of a strategic plan. The latter is the main subject of the project  presented. More specifically, the main ways of exposure to environmental risk and the most suitable dealing techniques are identified. Finally, an important step of the strategic plan of the environmental decontamination in the area, which is the rehabilitation of the Konofagos building, is pointed out. 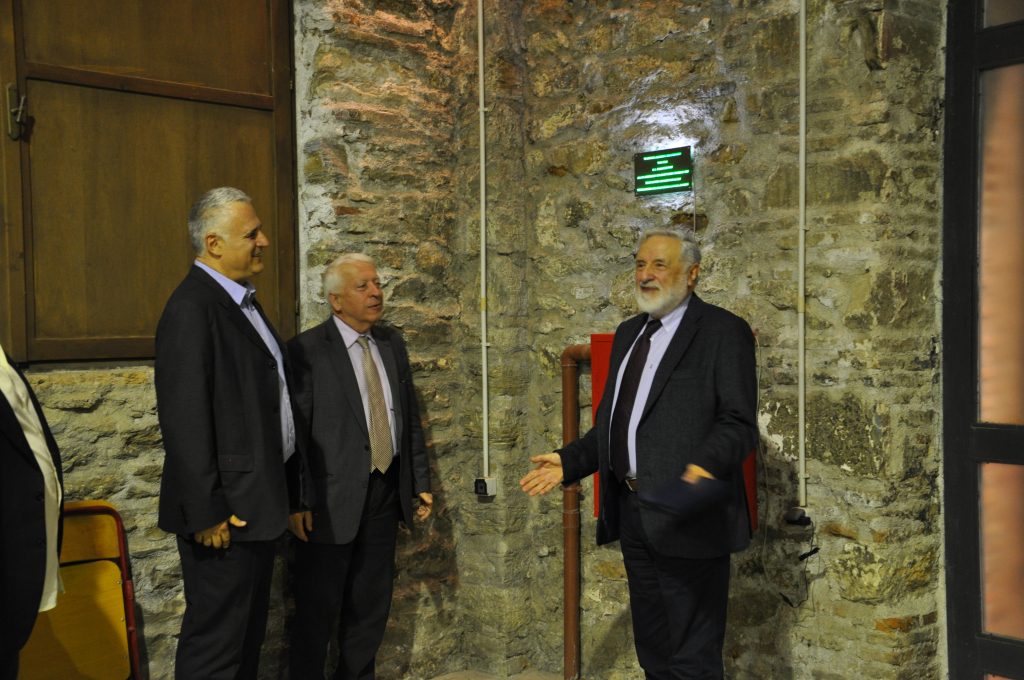 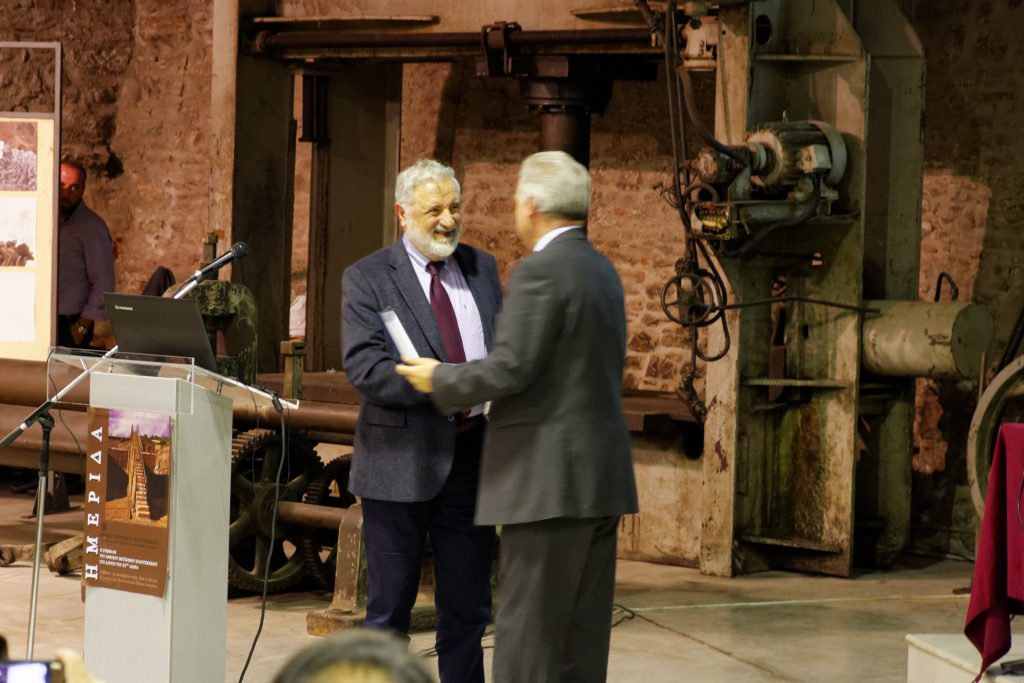 The last part of the event was dedicated to the LTCP’s founder and pioneer, Emeritus Professor K.I. Panagopoulos, and through him, to all those who gave flesh and bones to the Technological and Cultural Park of Lavrio as we know it today. The Rector presented an honorary plaque to K.I. Panagopoulos, while the President of the NTUA-AMDC unveiled another plaque that was permanently posted in the Event Hall of the LTCP. Emeritus Professor KI Panagopoulos, taking the floor, and after warmly thanking the NTUA for the honorary event, referred to the concept of know-how and of the techniques through examples of the ancient and the modern Lavrio.

During the event, some students of the NTUA’s School of Architecture had their projects, which were created in the Plastic Arts Laboratory, exhibited as souvenirs for the 150 years since Lavrio’s foundation. The students worked under the supervision of the Assistant Professors Giannis Grigoriadis and Costas Daflou in collaboration with the LTCP.

Finally, three students from the NTUA’s School of Civil Engineering presented their diploma theses concerning the development of the Town’s port. Vassilis Fountas analyzed his project, entitled "Utilization of the Facilities of Lavrio’s port in Attica for Energy Production through Renewable Energy Sources (RES)". Correspondingly, Christodoulopoulou Marianna and Niakas Vasileios spoke about their own project, entitled "Performance Assessment of Geothermal Air Conditioning System, through the ‘Energy Plus’ Software, on building infrastructure in the Lavrio’s Port in Attica".

Organization of a Workshop on: "Lavrio - Reuse of the Industrial Heritage" 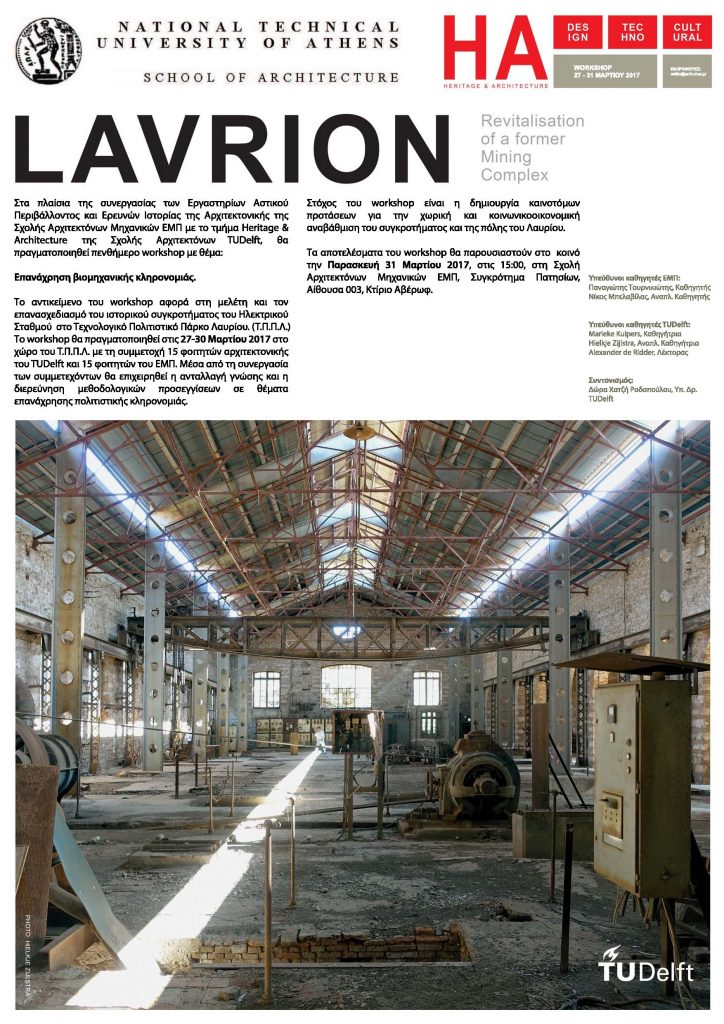 Within the frame of collaboration of the NTUA’s Urban Environment Laboratory and Architectural History Research Laboratory with the Department of Heritage & Architecture of the School of Architecture TUDelft, a four-day workshop was held:

The workshop were focused on the study and redesign of the historical complex of ‘Power Station’ in the Lavrion Technological and Cultural Park.

The workshop took place on March 27-30, 2017 at the site of LTCP, with the participation of 15 students from the TUDelft’s School of Architecture and 15 students from NTUA. Through the cooperation and interaction between the participants, the exchange of knowledge and the exploration of methodological approaches in matters of reuse of the cultural heritage will be attempted. The aim of the workshop is to create innovative proposals for the spatial and socio-economic upgrade of the complex and the town of Lavrio."

The Workshop’s result were presented to the public on Friday, March 31, 2017, at the School of Architectural Engineering, NTUA, Patision Complex. 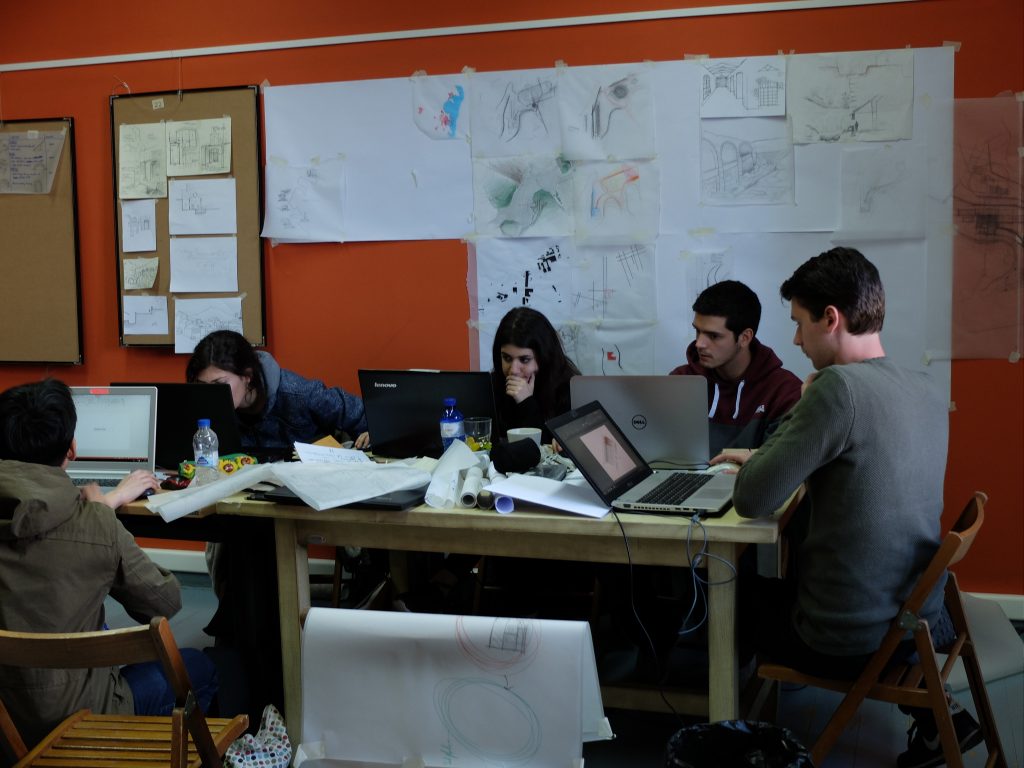 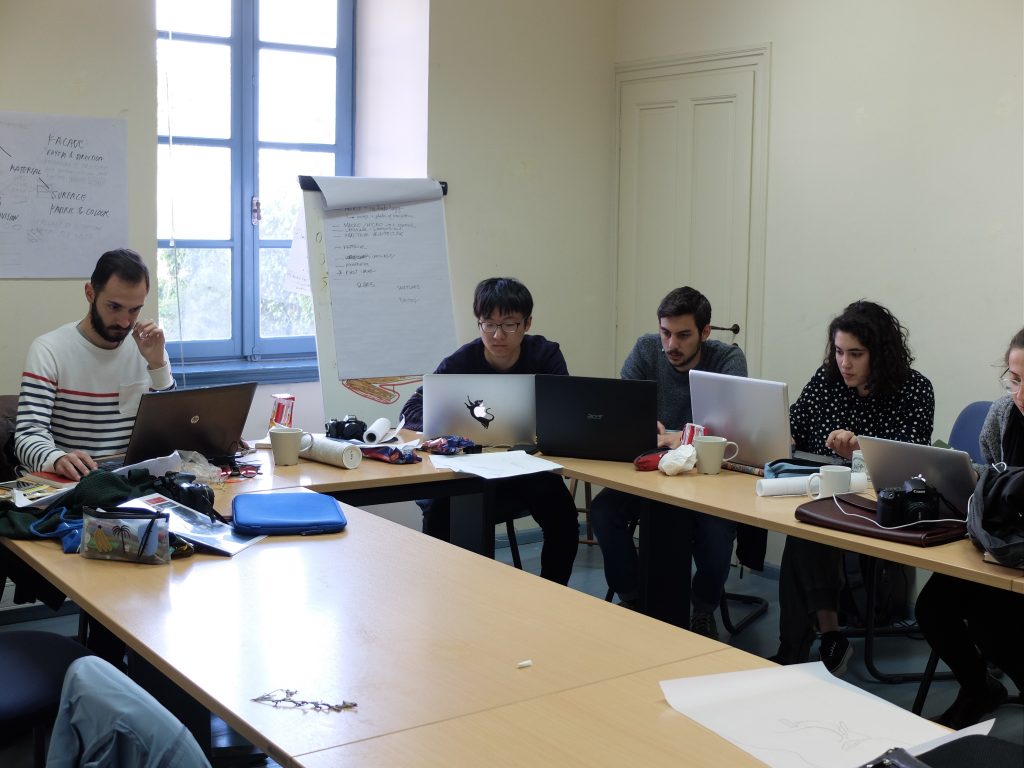 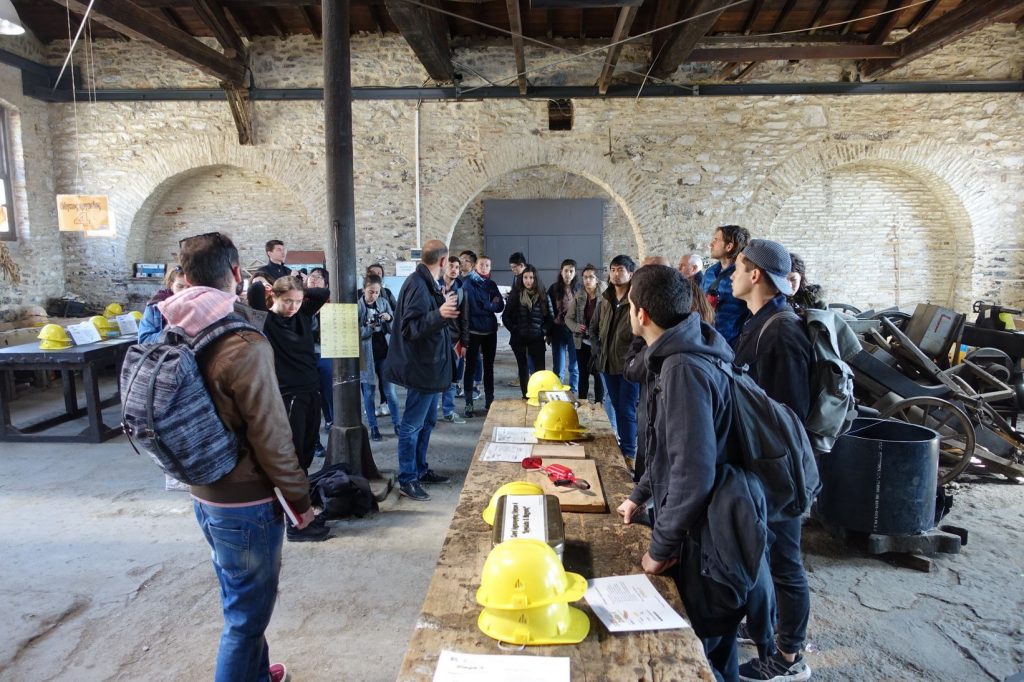 International seminar entitled "Mining the past" 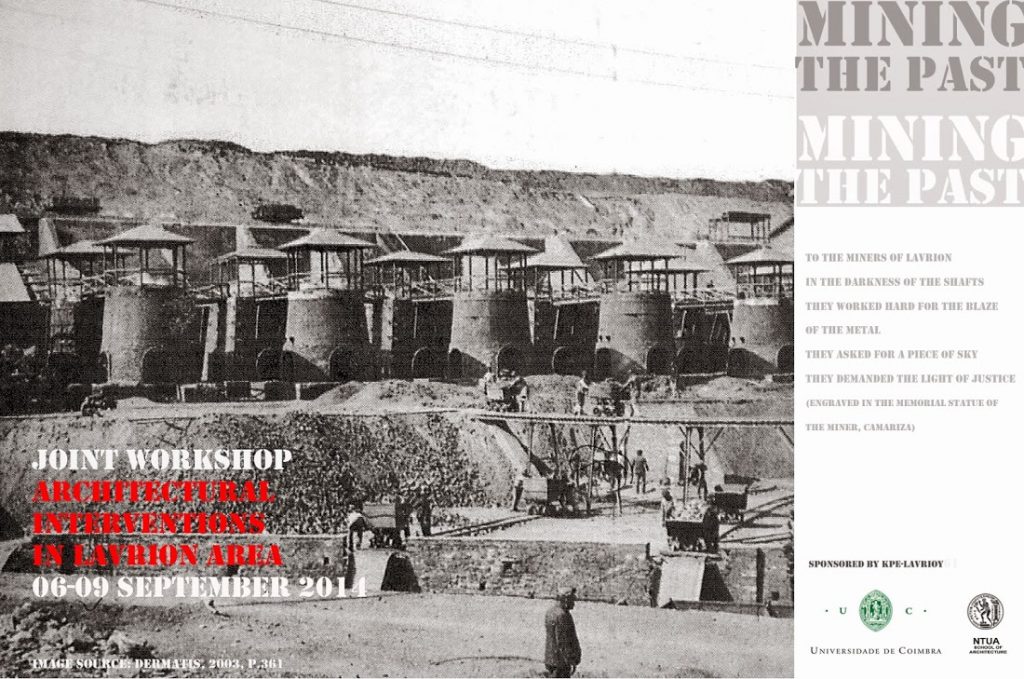 The NTUA’s School of Architecture, in collaboration with the Coimbra University of Portugal, organized, the international seminar / workshop "Mining the past" from 6 to 9 September, 2014 at the Park’s site. The event was supported by the Environmental Education Centre of Lavreotiki (EECL) and by the LTCP.

The seminar was focused on the historical significance of the area, highlighting its environmental and cultural value. For more information, click bellow http://miningthepast.blogspot.gr/p/home-page.html. 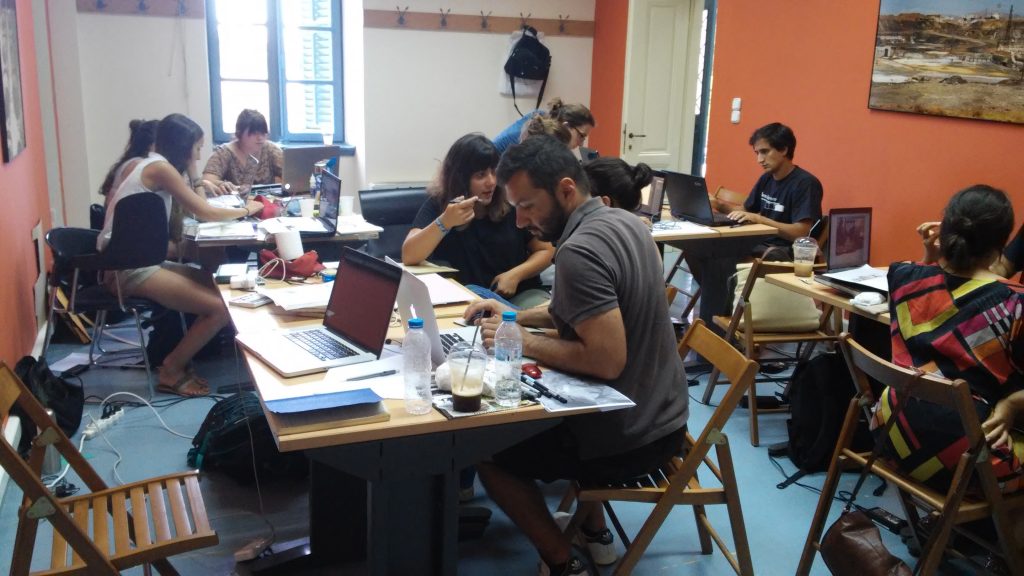